The Cape Roger Curtis Trust Society was formed out of the Conservancy in November 2002, for the purpose of preserving and protecting as much as possible of the Cape Roger Curtis lands as parkland. It was formally incorporated under the British Columbia Society Act on January 13, 2003.

On August 27, 2004, Cape Roger Curtis was purchased by the Cape Roger Curtis Joint Venture (now known as The Cape on Bowen Community Development Ltd.). The original single lot of 631 acres was eventually subdivided into 10 acre parcels. By the Fall of 2011, a substantial amount of infrastructure had been built, and several of the 19 lots in the Phase I development had been sold.

At its Annual General Meeting on May 21, 2011 (after much debate about what possible future role it might have), the Board and membership of the Cape Roger Curtis Trust Society voted to formally dissolve. Since the Trust Society website contained a wealth of material on the Cape, the Bowen Island Conservancy agreed to incorporate the majority of pages into this website in order to preserve this valuable source of information and background, for use in future conservation issues.

Before it was developed, Cape Roger Curtis was the jewel of British Columbia's Bowen Island: a magnificent 255 hectare wilderness on 3.7 km of Bowen's south and west coasts, encompassing coastal bluffs with a mosaic of Arbutus, Seaside Juniper, wildflower meadows, coniferous and deciduous forests, riparian areas, and mussel and eel grass beds offshore. 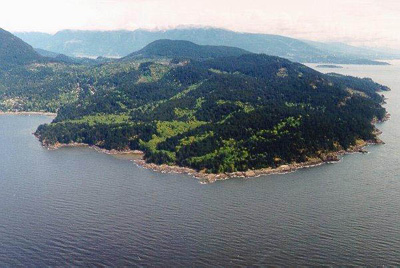 Though only a 20 minute ferry ride from West Vancouver, Cape Roger Curtis was blessed with high wildlife and plant diversity. It was home to plant communities which are rare in British Columbia, and supported a variety of threatened, endangered and locally rare species.

Cape Roger Curtis is a place that, for generations, has drawn naturalists, hikers, and kayakers from far and wide to study its ecology, ramble its forest trails, and enjoy its magnificent coastline. Although private property, the prior owners allowed the public to use the land at their own risk.

The community of Bowen Island has a passion for Cape Roger Curtis. That's why in 2002, when faced with the sale of the property for development, the Cape Roger Curtis Trust Society (CRCTS) was established to find ways to preserve as much of this magnificent natural heritage as possible.

The Conservancy maintains this portion of the website as an archive of the former CRC Trust Society's website.