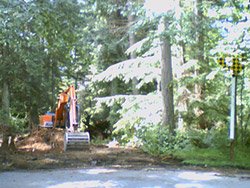 The committee of the whole has recommended council instruct staff to write a letter to the developers of Cape Roger Curtis urging them to refrain from “any further physical land alteration, such as road construction or land clearing …”

The resolution came as a result of council members, along with much of the public being taken by surprise by recent actions authorized by Cape Roger Curtis Joint Venture. Last week, trees were felled and land was leveled at the entrance to the Cape at the end of Whitesails Drive.

Councillors expressed frustration that they lacked an informed response when questioned by the public as to what exactly was taking place on the 650-acre property. They noted that no public notice was given, that municipal staff, council, nor residents of Tunstall Bay were informed of the nature and extent of the construction underway.

In an email to council, the municipality’s administrator, Isabell Hadford noted that a development permit was issued to WCD Consulting Ltd. last September for the construction of a driveway/service road to access the lands. The municipality issued a driveway access permit on January 19 of this year, stipulating a six-month deadline in which to complete construction.

“Staff was aware that the driveway was proceeding, we just didn’t know when it would happen,” wrote Hadford.

She also noted that according to the permit regulations, work was only to proceed under the supervision of an environmental monitor. According to the construction management plan, the monitor was to liaise with the municipality regarding construction progress. Hadford noted that local government staff was told that work was taking place only after it had begun.

In the strongly-worded resolution passed unanimously this Monday, council indicated that it was concerned that such actions could “jeopardize the public’s trust that the future of Cape Roger Curtis Lands can be determined in an open and orderly process…”

Last February, council adopted a framework for future planning for the lands advocating a comprehensive rezoning development plan. The owners of the Cape had previously applied for a 60-lot subdivision.

As recent as June 15, which is the date when the construction of a driveway access became apparent, CRC Joint Venture indicated a commitment to an “open, transparent” process. In a letter to Stephen Foster, of the Cape Roger Curtis Trust Society, D.J. Grimble wrote that “We are pleased to confirm… that we have reason for cautious optimism that the framework for a rezoning process for the property will be laid out within the next few weeks.”

An update on the Cape Roger Curtis website indicated that an environment monitor inspected trees before they were cut down last week, to ensure that no nesting birds were present. The project status report said the driveway is being built to provide access to a summer residence for the use of the owners.

Council’s resolution included the request that CRC Joint Venture work with municipal staff to improve communication with the council and the public.

Councillor David Hocking, who drafted the resolution stressed that clear communication was key to the process. If he was a developer, he said, and especially one behind a “highly contentious” project, he would first ensure that the public was informed of his intentions, and aware that they were legitimate.

“That’s how things should be in a public process,” he asserted.
© Bowen Island Undercurrent – used with permission