adminPosted on November 26, 2007 Posted in CRCTS-News 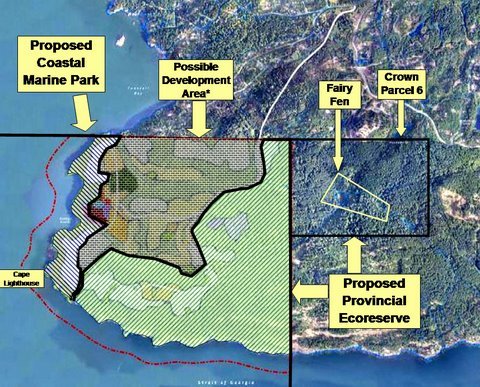 *CRCTS does not endorse any development at the Cape. However, if development is to occur, it should be tightly clustered and contain greenway corridors to buffer sensitive areas and pedestrian trails.

While we embrace ownership’s offer to create a truly substantial park, it is still a fragmented park with too much housing and other activity far too close to the fragile coastal bluff habitat along the south shore. The development plan could be much better fitted to the Cape’s ecological values and to Bowen’s needs and public interest if the parks and greenways aspect of the plan were further expanded as shown on the map above.

With Crown Parcel 6, including the Fairy Fen wetlands, immediately to the east of CRC, it is distinctly possible to leverage creation of an even larger park—or, more precisely, a waterfront recreational park with inland greenway/trails and a large eco-reserve to protect the Cape’s rare and fragile coastal bluffs. This outcome would permanently protect not only Fairy Fen but almost the entire Fairy Fen watershed, an idea which is already attracting interest and potential support and resources from Metro Vancouver (GVRD), Ministry of Environment BC Parks, the Islands Trust and various regional conservancies. The Trust Society would also like to see the island pursue the possibility of eventually establishing a marine conservation area surrounding the CRC coast to protect marine ecology, as well as over-wintering waterfowl and their food supply.

The above map is the Trust Society’s Wild Coast Plan 2 proposal. We have used Ekistics’ development plan as a base (for purposes of comparison only) and superimposed our preliminary alternative proposal. This is a working document for discussion purposes only. It can and should be further modified in response to the various scientific, archeological, hydrological and other studies once they are made available to us, and through negotiations with the owners and other stakeholders.

Our reasoning is as follows. The current comprehensive rezoning process will likely have one of two outcomes: either all the parties involved will agree upon a mutually acceptable plan; or an unhappy ownership group will withdraw from rezoning and reactivate their currently “parked” plan for 58 10-acre lots with limited public access and almost no parkland. We’d be right back where we were a year ago.

The Trust Society’s position has always been that we should save as much of the Cape in its natural state as possible. But we realize that, unless owners are willing to pursue a 100% conservation deal (and so far they are not), at least some degree of development of this precious 631-acre waterfront property is inevitable. Given that circumstance, we hope the current comprehensive rezoning process will provide a genuine opportunity for engagement and resolution of the long-standing CRC controversy in a way that does indeed protect as much of the Cape as possible. So we are doing our best to be engaged in a constructive way and urge you to do so as well.

We don’t yet know how much density the owners will ultimately seek, although it is rumored to be huge. Nor do we yet know whether they will disclose their density request at the next public meeting (scheduled for tomorrow, Saturday, Dec 1, 9:30-1:00 and 2:00-5:00 at Cates Hill Chapel), or whether they will instead use that meeting to probe the island’s level of tolerance for their second village concept. However, we are fairly certain that much of the land uses proposed, and density implied, by their preliminary plan would be better sited elsewhere on the island rather than at the farthest distance from the Cove.

We believe it is possible for ownership to satisfy their financial bottom line, create a development that contributes to Bowen’s sustainability and leave a tremendous conservation legacy – if they are realistic in their expectations and truly willing to work cooperatively with the community whose island and future they are attempting to shape.

Please attend one of Ekistics’ presentations on Dec 1 (at 10:30 and 2:30) and please, if you care about the Cape, ask tough questions and submit written comments, either then or later, to ensure that your voice is heard.

The Conservancy maintains this portion of the website as an archive of the former CRC Trust Society's website.